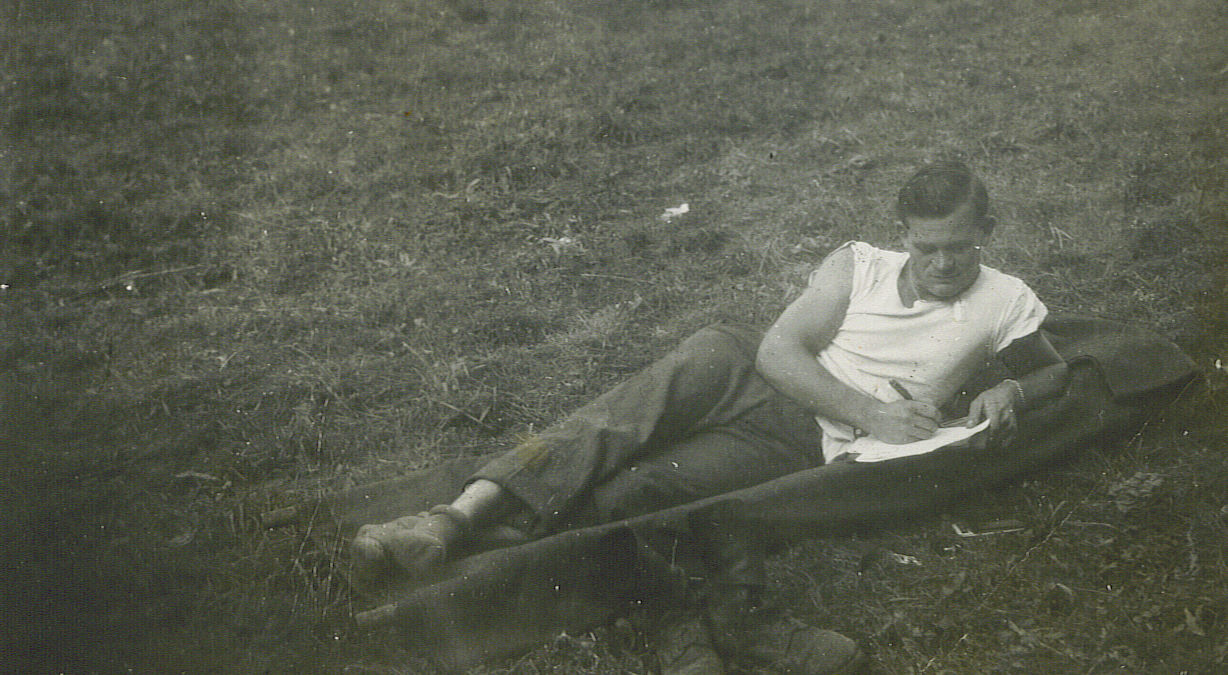 My grandfather, Cozby L. Sheffield, was a World War II veteran, serving in the U.S. Army. He served from 1942 ??? 1945 as part of the 3432nd Ordinance, MM Company. My grandfather was my hero for many reasons, especially for the pride he took in his service for the country. He kept in contact with many of his brothers from the service, eventually starting once-a-year reunion. My grandfather, “Pops,” as he was affectionately referred to, was a man among men – in my eyes. 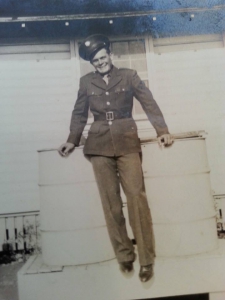 He was a wonderful husband, father, grandfather and friend. He loved his family and took care of them very well. He was a very outgoing and social person.I joked many times that we could travel anywhere in the country, or quite possibly the world, and he would run into someone he knew. He was a talker. He was intelligent; had a fantastic memory and told us many stories of growing up in East Texas, as well as of his service in the Army. Of course, like many of us, I listened to his stories, thinking there was no way I would ever forget what he was telling me. And, of course, I now wish that I had written them down.

Around 1997, my grandfather started to change. Of course, it was not until later that we realized he was exhibiting the beginning stages of Alzheimer’s disease. This outgoing, social man became quiet and withdrawn. He couldn’t remember people’s names. He couldn’t recall the correct names of things he was trying to talk about. All of this was understandably embarrassing for him, so he removed himself from conversations. The frustration he was experiencing was visible on his face, and in his eyes. Suddenly, the man who never met a stranger saw everyone as a stranger. He began to experience paranoia, and worried about losing his home, when no such threat loomed. We likely never knew the full extent of the fear he felt.

I was with my grandfather when he passed away on August 11, 2007. He was in hospice care and for many months he was not coherent. I was unsure if he knew who I was. It was incredibly painful for our family to see this great man disappearing before our very eyes.Since the time I knew he was afflicted with Alzheimer’s disease, I have involved myself with the Alzheimer’s Association Walks to End Alzheimer???s. I created a team in his honor, which I named The Houston Lampposts.

For over 10 years, I have walked in his honor and memory. It is a wonderful way to take the grief I experience, as well as the wonderful memories I have of him, and keep them alive. He was a fighter and I am a fighter ??? largely because of the things he taught me. My dream is a future without Alzheimer’s, where no one has to watch someone they adore be slowly taken from them by this dreadful disease. I have a 5-year-old son now named Robert Cozby (R.C.). Unfortunately, he never got to meet the wonderful man from whom he inherited his unusual middle name. However, he will always be told about the great man his Pops was. 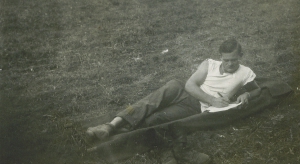 The Alzheimer’s Association offers many valuable services to both patients and families dealing with Alzheimer’s Disease. They offer services specific to Veterans as well. Please get involved with the Walk to End Alzheimer’s! There are 13 walks in Southeast Texas. The Woodlands/Montgomery County Walk is on October 4, 2014 at Town Green Park. For all of the great men and women who have served our country, and for the ultimate battle some of them have fought with this disease, get involved. Honor the memory of your heroes! Keep those memories alive! Without those memories, we lose a very valuable piece of our history as Americans. 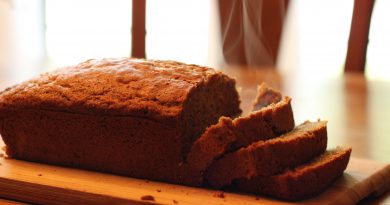 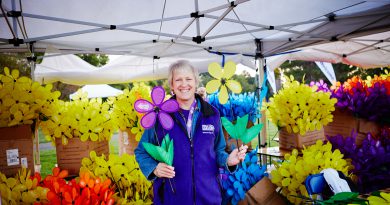 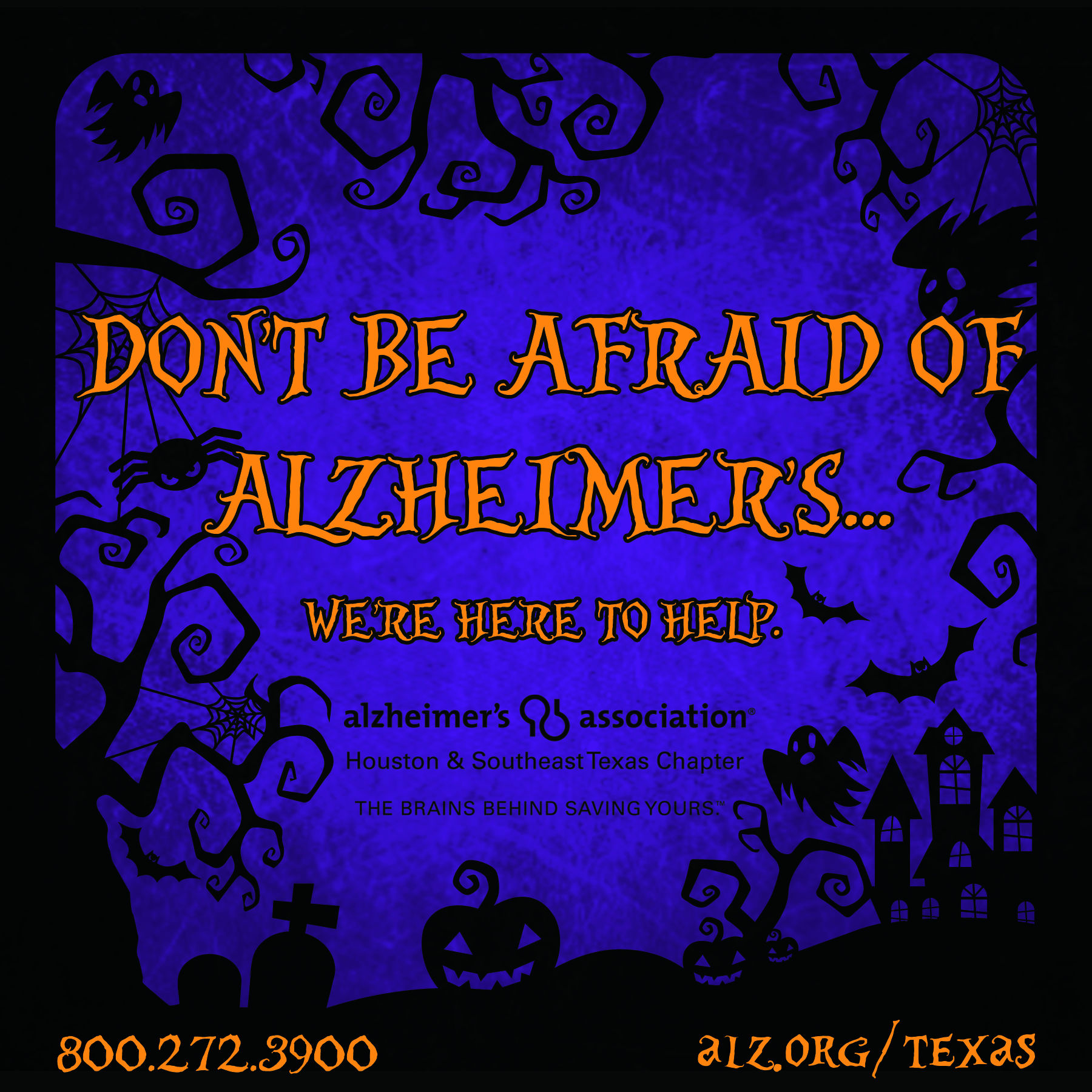 Dementia & Halloween: Tips for Everyone to Enjoy the Holiday

October 20, 2015 AlzTex Admin Comments Off on Dementia & Halloween: Tips for Everyone to Enjoy the Holiday